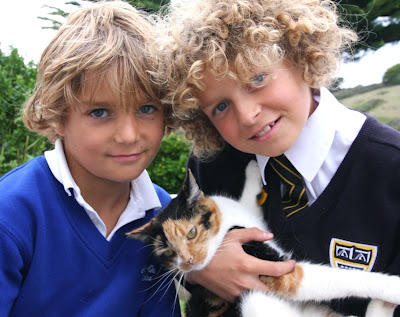 A quite incredible story - but we've just been to pick up Esme from Penkridge after a local family spotted her in their fields and recognised her picture in the local paper (massive thanks to them). Five weeks she's been living rough. Tired, hungry, smelly and dishevelled , it's been quite an ordeal, but I'll be fine! Oh and the cats okay too! A massive thanks to Helen and her two girls Katie and Anna who became our eyes and ears some 250 miles away - what they did to help was quite extraordinary.
I'll sit down next week and somehow summarise the main events! - there have been some incredible incidents along the way. Even today, having never met Helen and her family before (just thousand of texts and phone calls) we literally bumped into them coming out of the supermarket in Penkridge. And apparently yesterday at the vets, when they called Janey to check that the microchip number matched and she confirmed it, the packed room burst into cheering, clapping and tears all round! She's become quite a celebrity - a reclusive and elusive celebrity mind!
She's back on the sofa fast asleep now. Libby our black lab has climbed up next to her and Frankie (cat number two) has jumped into the cat basket by the door - perhaps she thinks it's her turn for some R and R. The family is once again complete and it feels great. Janey never gave up on her.
Hottest day of the year and we've been stuck on the motorway all day - that's ironic!
Off to play with our band Mahoustic up at the Waterfront for the Jess Memorial in aid of Chicks in a minute. Haven't played a guitar in three months, haven't sung for three months, haven't played as a band for three months - the original band booked, cancelled at the last minute so we're standing in, as always we'll give it our best shot. I have a strategy for nights like tonight - Jack Daniels! I'm not a big drinker, but I find that if I partake of a few shots, at least I enjoy myself and more importantly it looks like everyone else is as well, even if they're not! Works ever time - jobs a goodun'.
Posted by Pete at 16:00 No comments: 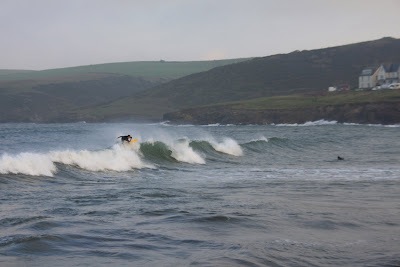 The surf's dropped off quite a bit this morning - not the meat that we had yesterday. But still a couple of foot on the sets, should improve as the tide drops again. Yesterday's session was one of my favourites of the year - overhead, sweet drops and the banks were pretty good. In the line-up was Big Sam, Claude and Ryan - they looked like they were enjoying it too!

3ft, maybe more on the sets, huge tide. High at the moment and lots of moving water. Should get pretty special as the tide ebbs. 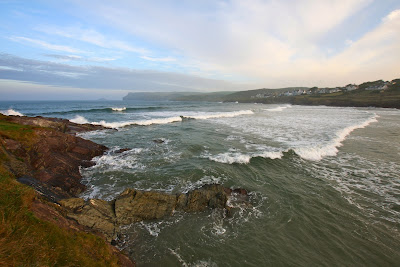 Midday - and I have jelly arms. I had nothing more to give out there. What was it? 4ft on the sets - some nice drops. Moved over to the left away from the crowd when the tide pushed back, sneaked in a few real good ones. A very happy boy.
Posted by Pete at 08:18 No comments: 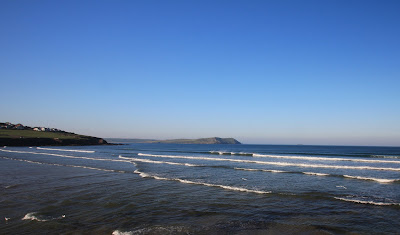 Jumping on my bike this morning to cycle down to work I said to my neighbour (we have brilliant neighbours), "Off to the Coal face!" She laughed. "Off to the beach more like!" she replied. Fair point. 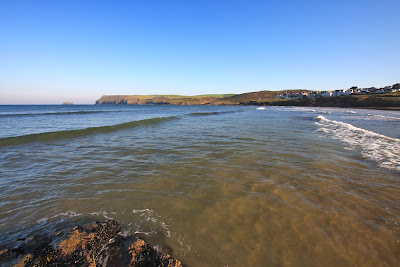 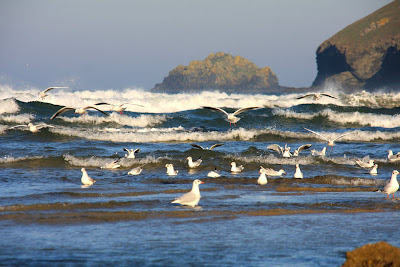 As lovely as it is today - we're all frothing on tomorrow's surf forecast with 3-4ft expected. Might just save the old shoulders for then!
Posted by Pete at 09:29 No comments: 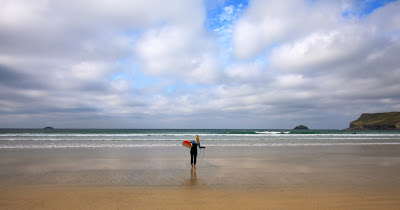 What's it like surfing in September? For the lucky few - this is what it's like. Instructor Dee makes the most of the gap between lessons. Dee has done a fantastic job for us this summer - very popular amongst both staff and clients. She's off to Costa Rica with some of the other crew for the winter - hope she comes back for another season next year.

It's all gone a bit Ed Milliband 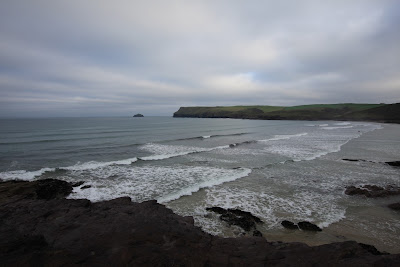 The surf has all gone a bit Ed Milliband this morning. You know, you want it to be good and all the ingredients are there but it's just a bit grey and lacking any sort of real impact. And, of course, we know that there's something around the corner, very similiar in appearance, but altogether more upstanding and carrying more gravitas. So we'll sit tight, let this moment pass and look forward to the days ahead.
That's political satire dealt with this morning - my, 'of the moment' joke.
The reality is the surf has dropped off - in the 1 -2ft range. Great for beginners and improvers.
There is one thing that I cannot and will not leave home without. Sunglasses. For years I taught surfing without wearing them, the instructor code being that you need eye contact with your clients - naturally. But without any eye protection, over a long period, damage will occur. And that's where I'm at - my eyes are very, very sensitive to light and I can get a bit panicky if I find myself misplacing them. In our 'Instructors Bible' we advise our own instructors to wear sunglasses, but remove them when talking to clients. A wide brimmed hat will improve things, but it's the reflection off the water that I think does the damage. So even on a day like today, when it's overcast, the sunglasses are never far away. I don't suppose that's interesting in the slightest!
Great to see Argyle win on the weekend!! Come on you Greens! Green Army!
Posted by Pete at 09:23 No comments:

Oh here comes Janey, back on your balls! I can't lie, I've been in for a few this morning. Having missed the weekend because of paintballing (when you get hit on the head from close range it feels like someones trying to break your skull open with a small hammer) and other stuff, it was only right that the rubber was donned and I tickled into a few first thing. Jolly good it was too, the magic was flowing through the turns, it's hard to hold class back - well that's the adage my very old latin teacher used to use when the bell went.

So here I am in the office and there's no-one in! I'm all on my lonesome. Kelly and Wailin are on the front line giving some tuition from the top drawer, Sarah and Rach are days off. And Janey's gone up to the house. So it's just you and me! And you know what that means - we go crazy!

Okay Crazy Monday - but this is just between you and me okay, don't tell Sarah who's back in the shop on Thursday. If you buy anything from our on-line shop over the next couple of days (ie before Sarah comes back in) you can have a 10% discount - all you have to do is pop in this code Loyal1b2011. So think Christmas, think hoodies, think calendars - it's all here for you. I'll leave that with you - and don't forget, it's your own time your wasting!

Surf's Up! Shorts..... heatwave on the way this week and the surf forecast is as follows;

- light South-easterly winds from tomorrow for the rest of the week, wave period between 9 and 11 seconds.

What's the wave period? The gap between the wave... the bigger the gap, the better the wave. For example, 5 seconds = locally generated wind swell, rubbish. 14 seconds = long distance travelled swell, bonza! NB. Local wind affects the shape and quality of the wave, not neccessarily the size. A wind with a bit of Easterly is generally accepted as the best at Polzy to hold the face up. If you get the combo of long travelled swell and offshore breezes, the only other determining factor on how good the waves will be, is how the sand is lying on the sea bed ie the sand banks over which the waves break. And at the moment.. the sand is lying good, real good. Here endeth today's surfing lethon.

Hang on, phone's ringing..... chap from India want's to know if I'm keen to sell Homer Park?! Sold that about four years ago! Onwards....

Other shorts... little article in this month's Wavelength about yours truly.. although we could go mad on publicity, we actually quite like just working on recommendation, I think there's long term strength in that, so the article is a bit of a one off. Oh and thanks for the Olympic Flame nomination re. Boardriders. I'm not one for awards and stuff but that one is actually pretty cool. It's a bit like the X factor with a further cull towards the new year, so I don't actually know yet whether I'm going to have to train for the 200 yds!

Hang on, another call... what's up with Mumbai today.. grr, they're driving me nuts!! 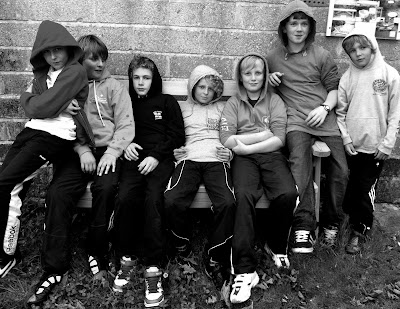 Billy and his mates waited for what seemed like years to go Paint balling for the first time - you have to be in yr 7. But the day arrived and that day was yesterday. Joined up with a crew from Tintagel to do battle. I have to admit that when you get hit on the top of the head it feels like someone's trying to break open your skull with a small hammer. Body shots, not so bad, but anywhere that isn't protected such as bonce and hands... it really hurts!!
The Dads discussed beforehand that we'd take part, but go easy on the kids... it should have been the other way around!
Posted by Pete at 08:59 No comments: