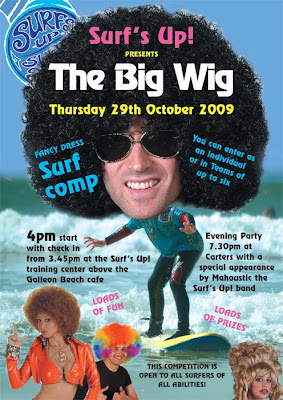 On Thursday the 29th of October 2009 Surf’s Up will be hosting our annual fun surf competition, relaunched this year as 'The BIg Wig', followed by an evening of Party action with a special appearance by Mahoustic the Surf’s Up! band at Carters. This year we’ve introduced a new format to make it even more compelling!

The Big Wig will kick off at 4pm with check in from 3.45 pm at the Surf’s Up! training center above the Galleon Beach cafe.  We estimate that the competition will be completed by 6 pm and this will be followed by a prize giving ceremony at 7:30 pm in the Carters pub which will be followed by the after party in the same venue.

THIS COMPETITION IS OPEN TO ALL SURFERS OF ALL ABILITIES!

The emphasis is on fun challenges rather than formal competition. The fancy dress code for this year is, as you might have guessed “Big Wigs”. We'll leave you to decide what that means - go crazy!

The maximum team size is six people. However if you don’t have enough people for a full team don’t panic! You can enter as an individual or a smaller group and we will match you up with other surfers to form a full team. Who knows if you get lucky you might get an instructor on your team as a wild card entry!

Each team needs to nominate a team captain who will be responsible for important decisions on the day.

Your first challenge is to build a 'dug out' in the sand in 20 minutes, for your team to use as a base camp throughout the event. You can bring props to furnish your camp! Please bring along spades, flags, banners etc (strictly no JCBs!) and anything else you think will make it stand out from the rest.

Each team will have one swell board to compete on.

There will be 12 wave challenges and team captains must ensure that all team members surf twice.

A range of bonus points will be awarded for style and creativity. And for best base and best wig outfits.

So come on, drop us a line and we'll send you an entry form. It's going to be huge fun!

Just one of those days when things go your way. Only last week Janey spotted that we'd been paying VAT on all our kids clothing, wetsuits etc.... the accountant is on the case and we've been told we can expect a hefty rebate! Sweet. About time - the tax system is totally at odds with small businesses. Give assistance to small businesses and the economy will recover much quicker. There were other bits of good news today, but not really for public consumption at this time!
Spending time on the bike has been healthy. Not just in a physical way, but a mental. Gives you time to step back and think. Myself and Janey have been on a personal journey (together - is there any other way) recently about where Surf's Up! is heading. We started Surf's Up! fifteen years ago to fulfill a lifestyle. This we achieved. But as the business grows, we've moved further away from this simple ideal. No complaints. However, we've discussed at length a new vision for Surf's Up! - we've done the big surf school thing. It came out of providing a good service.... the location and timing were also pretty key. Oh and some hard work. And this led us to become the largest surf school in the UK (some say the world!). This year we've added the shop and the new training facility. But still we feel that there's a better way to run Surf's Up! Our plan is gathering pace and the momentum will carry it through to the conclusive stage. It's change that keeps the fire burning bright.
Thought I'd walk like John Wayne today - shouldn't have worried. Been dancing around the beach like the other Wayne instead.. Wayne Sleep!
Posted by Pete at 18:26 No comments:

I like my toys! And having committed to the London Triathlon next August the one thing I'm missing is a road bike! So negotiations have been ongoing with my beloved wife, Janey. It's funny how it's men that seem to want the toys. Anyway, yesterday I drove down to the Specialized shop in Plymouth to drool over some fantastic machinery. I left with a demo bike to have a go on.
Today I cycled to Plymouth, loved the bike and cycled back on my new one! That's about 100 miles all in! Slightly fatigued, but it must be the trampolining every night that's strengthening my chicken legs, because it wasn't too bad.
So what's the deal. Well it's like for like. I've had to assemble all my past toys and put them on e-bay. Which brings a tear to my eye, but it's totally fair. The deal is to sell enough toys to pay for the bike before the Visa bill hits the desk! I'm on the case as we speak - pressures on or I can expect a very severe word in my earhole. Now the bike in question is a Specialized Roubaix, and it's awesome. Over that sort of distance I thought it'd either be really uncomfortable on my butt or would put strain on my back. But it was as smooth as you like. Quite a hilly route, but there's a great stretch from the roundabout just outside Liskeard all the way to the Bodmin Parkway railway station. It's ever so slightly downhill all the way and you can stick it on the big ring and really give it some. Bit scary with the big lorries hurtling past only feet away - keeps you on your toes at least.
Which brings me sweetly onto our clear out. We're having a mega Autumn clean. So much stuff around the house surplus to requirements. We're going to do a few car boots to clear it all. Quite fun as it goes.
Surf's dropped off a bit now - but how good was that for a few days! Right out of the top draw.
Fin's got a swimming gala in a minute and then there's an open day at Wadebridge school. Bit undecided about what to do when Billy reaches secondary age - keeping an open mind at this stage.
Posted by Pete at 16:01 No comments:

Surf's all time! 3- 4ft of glass perfection! Don't miss out now! Will be good all day. Polzeath at it's very best.
Posted by Pete at 13:33 No comments:

As good as it gets

3ft - maybe 4ft on the sets, blue skies, no wind, dolphins jumping through the line-up - i'd be hard pushed to recount a better day at Polzeath. And as we welcome in the new day, signs are every bit as good as yesterday. Perhaps a bit bigger on the sets, but still an easy paddle out. Okay, we have to wait sometimes for the best days at polzeath, but when it works there's no where on earth we'd rather be. So a few things to sort out this morning and then it'll be on with the wetsuit for the first of two sessions!!
It's been an assault on the body the last few weeks. 120 miles on the mountain bike last week alone. And that included a ride with my mate Nick in Burlawn woods. The first time I'd used the SPD's where you clip in to the pedals. They're awesome, but when you're new to using them, it is possible to come to a halt and not be able to clip out in time. This results in falling over sideways. To the walker or casual passer by, this must look very amateurish! I was filled with anticipation on this ride as Nick cycles a lot! And I mean a lot. And I could only imagine the sort of pain that he was about to put me through. In reality he took it steady and we had a good first run out. However this may have stemmed from the fact that within the first five minutes I'd managed to cycle half way through the biggest deepest puddle, ground to a halt, got my feet stuck in the pedals and toppled off sideways, leaving half my body immersed in cold muddy water (including my face). It was hilarious. And it was at that exact point that I'm sure Nick clocked me as a 'novice'. Four times I fell over - four times!
I was amazed at how many people read my splash and dash blog on Friday. Thanks for the support.
Posted by Pete at 09:32 No comments: