dad, what are you doing? 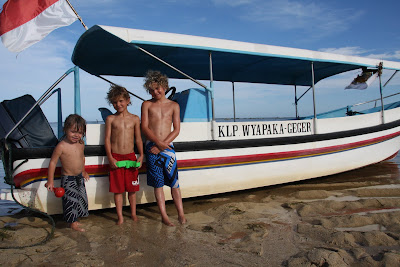 "Dad. What are you doing?" Billy asked yesterday morning."What do you mean?" I answered somewhat impatiently. We'd all been up since 4am suffering with jet lag.
"You're tucked-in!" he stated.
It was true. It's amazing how quickly your kids pick up on their old folks ageing. There was a chill in the air and I'd tucked my t-shirt into my jeans! No big deal in the safety of my own walls, but a big enough faux pas to cause Billy concern. We laughed and I untucked. It had followed a question the previous night. "What are Pillocks?" Janey and I both laughed. He expected them to be things. So I went on Wiki to find out the definition. Turns out it was used many years ago to described, probably in a derogatory fashion, someone who only had one ball. Again much hilarity ensued. His swim coach had used the expression to describe some of the assembled club swimmers, this was after using a stick to hit some of them (albeit gently) on the head as they swam. I wonder what that Mrs. Pratt would have made of that!? 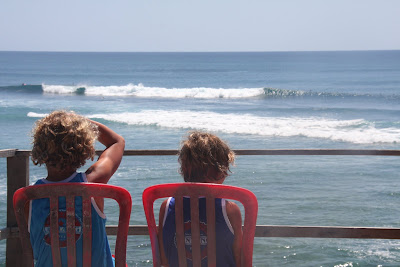 So we're back! Back to an amazingly clean and tidy house (Jane's Mum and Dad house sat whilst we were away tending the pets! big thanks to them) as it goes. Slightly disappointed that the cold weather we left behind, is still here. I'd promised the kids the trip of a lifetime and Bali delivered. 1 -2ft on the beach in front of the hotel, perfect for Billy and Fin. And head high sets at Nusa Dua and Froggies, perfect for moi! I doubt very much that you have a real interest in our holiday so there's little need for me to bang on about it. Except to say that when you go away you have certain expectations - we ticked all the boxes on this one. It is a truly fantastic place to go and visit and a great destination for a family. 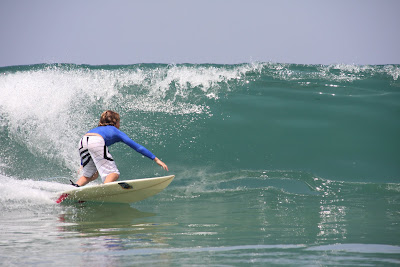 Billy at Legian - he was surfing really well.
Wailin had already been there for a few weeks running the Surf's Up! Bali surf camp - which sounded as if that'd all gone really well. We had a few dawnies together and got some great sessions pretty much to ourselves. I even scored a couple of grinding barrels, or as Wailin described them, 'Head dips'! For some reason he always took me to where the 'rights' were. Funny that, him being a regular footer an all! In protest I managed to backdoor a right point (which was fine until the lip decided to give me a quick tour of the reef at close quarters). I'd never been to Froggies before, Billy came on the first dawney (5am start). A walk of some 300 steps down a cliff, then a wade across a lagoon to the, yes, 'right' point break - but what a spot!
White water rafting, Fire Dance, Water Park, Padang Padang, Ullus, Serangan, Kuta ... and then there's the people, the culture, the heat, the food, the traders, the scooters, the temples, the monkeys, the surf shops, the bakery, the back streets. It's an experience overload and I love everything about it as did Janey and the boys. Happy, happy days.
What was almost as remarkable as the trip itself was the fact the myself and Janey hardly spoke about Surf's Up! We're married to each other and seemingly the business, it's a 24 hour love affair. It's definitely healthy from time to time to fully switch off and just enjoy each others company. And I don't think we've ever achieved that to this extent in the past 16 years! Knowing that Mikey and JD were fully on top of operations back at Polzeath, we could go about the business of enjoying the moment. That was really cool.
And we were right to place our faith in Mike and JD. Together, they manned the ship with real integrity and care, particularly when there were a few very cold snaps for suiting and booting. A big thanks to them both. And again to Silv and Evan for the continuous work they do behind the scenes.
Whilst we've been away bookings for the coming season have been coming through thick and fast. Very strong indications that this is going to be a cracking year!
Posted by Pete at 09:17 1 comment: