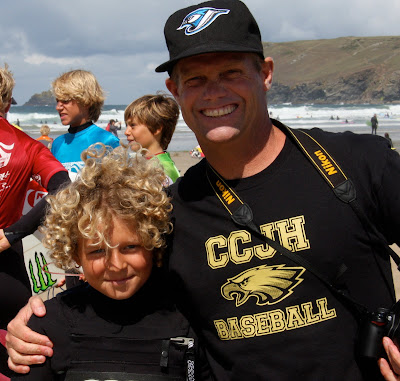 It's hard to know where to start really! Today Joey Buran came to visit. Now if you don't know who he is, a quick resume. Nicknamed 'The California Kid' his passion for surfing was unsurpassed and he became the youngest surfer to compete in the Pipeline Masters. In 1984 with the surf maxing out, he became the youngest surfer to win the event. It's the absolute dream of any surfer. Everyone went crazy and then immediately after the presentation the heavens opened and rained like never before. Joey was the only one left on the beach - it was the biggest anticlimax. He then went through a very difficult journey - involving drugs, alcohol, depression and the death of his unborn child - and during this period he even tried to take his own life. 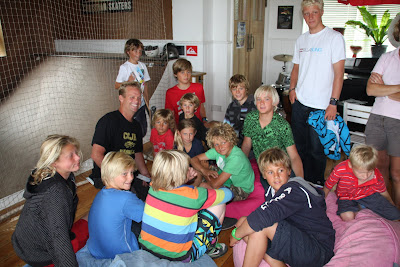 He's released this movie called 'Beyond the Dream' I recommend it. His saviour was the bible. Now as some of you will know, I am not a man of the church. But, if there was ever an occasion when I could see the power of what his beliefs had done for someone - then this was it. Joey has gone onto be inducted into the Surfing Hall of Fame and to coach the US surfing team. He is one of the true surfing greats held in high esteem by his peers. 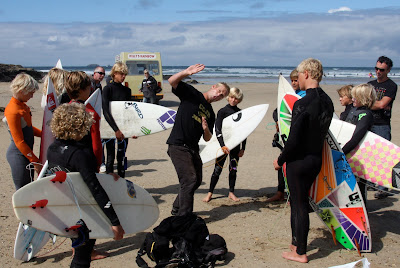 To have him here today, seeing his movie, training our own Junior Elite Squad - well it was right up there with all time highs of the 16 year history of the surf school. And he really put the Elite through their paces - he worked them good! A big thanks to Joey for stopping by. 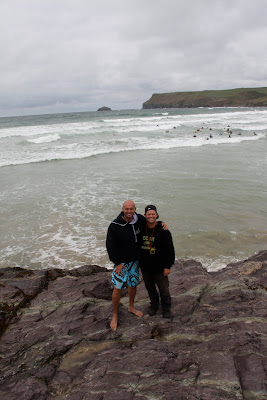 Now you see it, now you don't

I always thought that Tony Hayward from BP was alright. Here was a chap who's technical skills got him to the top of one of the world biggest companies. He was then thrust into the worlds spotlight and clearly dealing with the media was not one of those skills he possessed. But that was okay, they know that now, doesn't make him a bad guy - anyway, turned out that what he originally said about the breakup of the oil was right on the money. Obama clearly had a different agenda. Rather surprising considering the American dependancy on the sticky stuff and their total disregard for the environment. Maybe this is their shot across the bows, the wake up call to perhaps opt for the Micra instead of the Mustang.
Boardmasters starts today down at Fistral - might go down and take a look. I popped in yesterday - it's all doom and gloom. If you've got a shop down there and no-ones buying, even at heavily discounted prices. What do you do?
We've been luckier than most in Polzeath. There's definitely a change in the air, no question about that. But there's been enough business to go around. It's all down to the weather from here on in. What we have to be reassured about is the changes we've made for the next couple of years. It would be stupid to pretend that it will be anything but very tough for everyone.
Posted by Pete at 08:54 No comments:

Surfersvillage Global Surf News, 2 August, 2010 : - - On 2nd August 2010 World renowned surfer and ex 1984 Pipeline Masters Champion, Joey Buran arrives in the UK and will be staying for a couple of weeks, to take in the Relentless Boardmasters and undertake a number of coaching clinics in England and Wales.

This rare opportunity to see Joey and his new movie ‘Beyond the dream’ has been organised in a partnership between ‘Creationfest’ creationfest.org.uk ( Free Music and Skate Festival ) and Christian Surfers UK, christiansurfers.co.uk along with some of the countries top surf schools.

Joey has had an amazing life, from being the original ‘Californian Kid ‘ to winning the Pipeline Masters, and he then went on to become a chaplain of a church in California and to become the US surf team coach for two years between 2007 and 2009. Finally in 2009 he was inducted into the prestigious ‘Surfing Hall of Fame’.

Oh dear, I stepped on the scales last night, for no reason other than they were there. Hm, seems that I've developed a summer comfort layer! The six pack has disappeared under a layer of middle age spread. My kids find this hilarious and run around the house shouting "Belly's gonna get you!" I will not be drawn by this infantile behaviour. But granted, action needs to be taken! I think a bit of Yoga and Pilates should do the trick.
Apart from that - nothing else to report. As you were.
Posted by Pete at 08:33 No comments:

It was always going to be the surfing con of the century - the Bournemouth Artificial Reef - on the basis that you cannot create quality lined up surfable waves from wind chop. Which is what Bournemouth predominantly gets! The real story is that Bournemouth wanted to call their town the 'surf capital of the UK'. Well all reports indicate that it's been a complete disaster.
http://www.telegraph.co.uk/news/newstopics/howaboutthat/7374343/Bournemouth-artificial-reef-near-impossible-to-surf.html
It's a shame because it's nice to see these things succeed, but it really didn't take a genius to work out that this plan was flawed from the start.
Newquay is having a very, very tough time. They shelved plans for an artificial reef a while back - perhaps now is the time to revive the plans. Because there, everyone agrees, it would be awesome.
Posted by Pete at 15:11 No comments:

Ay, that's better. Feeling the love this morning!! I was as cross as a grumpy bear last night. 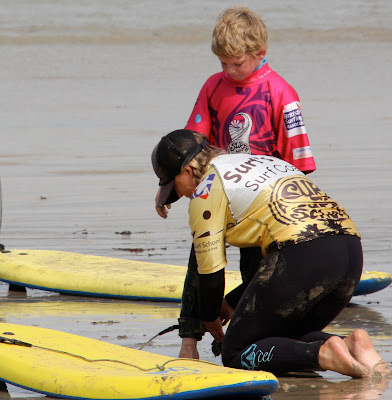 Surf today - 2 -3ft light onshore. I've seen better - but as the saying goes "Great for beginners and Improvers". Here's a photo of Sammy B. Sammy is one of our all time favourites - totally brilliant. Every company needs a Sammy B. Much loved by staff and clients.
Posted by Pete at 08:49 No comments:

I've never been in a fight, not bad for 44 years - but I could have thumped these yoofs tonight!! Okay here's the story. Every night at about 10.30pm I go down and do the final trailer pack. I put the signs away and have a general check that all is well. I then go up to the shop and beach house and check that all is well there. Tonight on my way back from the Beach House I was walking across the entrance to the beach car park when this bottle smashes in front of me. No big deal I thought, someone's just dropped it - and they'll be right on it. I looked up at the 30 kids - not one of them made a move. This hadn't been an accident - it was on purpose.
So I went over. "Who chucked the bottle?" I asked. After a bit of investigation, turns out it was this girl. "you're going to sort that out yeah?" She wasn't interested and neither were her friends. Hm, I surveyed the broken glass on the sand. I know, I'll go over and watch from the car by the trailer, see what happens. Not 5 seconds from taking up my watching position, this other lad, mid-conversation, throws another glass bottle onto the sand! He must have been mid sentence.
Now I'm mad, furious. So I head back over, pick up the bottle, go back into the middle of the throng and jabbed him in the arm "I think this is yours mate!" he looked at it. No reaction. "If you like it here, why ruin it?" My reasoned, colourful and very angry sermon met with deaf ears. So I put the bottle in the bin and then picked up the broken glass myself.
I'm a great believer in that kids have this rite of passage to go through - I don't have a problem with kids having a few too many beers, that's fine, I know I did. It's a great age. But this crew weren't drunk! They were in the early stages of their night out and perfectly able to make a judgement. I think that's what annoyed me the most!
And, relax.....
Posted by Pete at 22:56 No comments:

8am - Riding the Tube 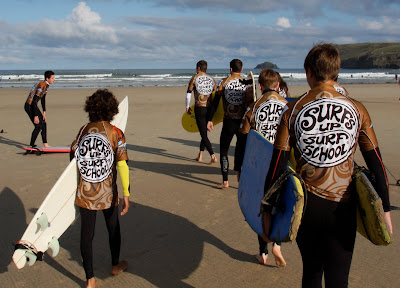 8am this morning! What a great way to start the day. Get in the sea before it gets too busy! Surf report is for 2 -3ft all week - fun for all! Perfect for beginners and improvers. 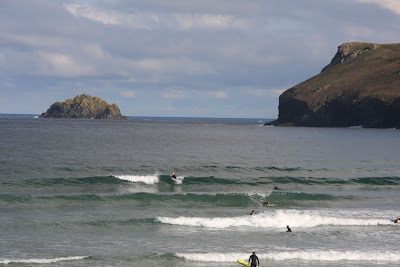 The Surf's Up! Boardriders start their intensive training courses today. They jump in the minibus with Kelly and head all around Cornwall, hunting down the best waves. Always good fun. Might have to join them one day! 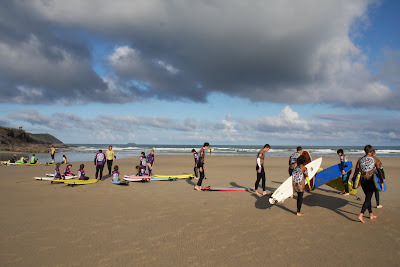 Alice, who works in the office, is doing X Factor. Either that or her Facebook has been tampered with. I've heard her sing, I favour the latter option! If it's the first, my apologies... best of luck!
9am and the beach car park is full!
Posted by Pete at 08:56 No comments: