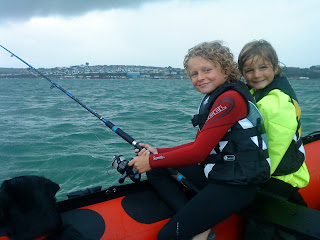 It's at this time of year that I usually lose that winter bond with the kids as they break up from school. Normally trapped on the beach whilst they do all sorts of fun things with their cousins. It's been a bit different so far this year - long may it continue! 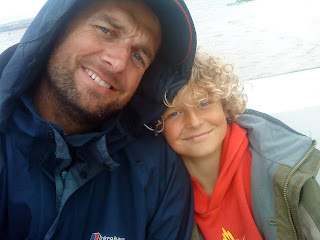 New in Today are the Member Discount Cards - available to everyone that goes through the doors of Surf's Up! - Sweet. You can either pick one up at the surf school or give us a call and we'll send you one. How does it work? First you have to register your card - we take all your details, name, address, e-mail etc and then put you on the 'system'. Every time you either buy something on-line, in the shop, have a surf lesson or stay at the surf lodge, you get awarded points. More points mean prizes. But also we'll contact you if there's a new product that might be of interest, or there's good surf on the way - it could be that we have late availability on the surf lodge!! Give us a shout today to get your card! 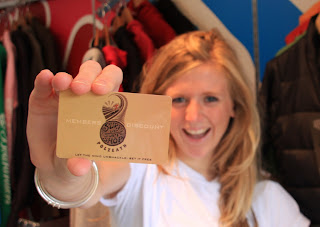 Rain, rain go away - come back in November 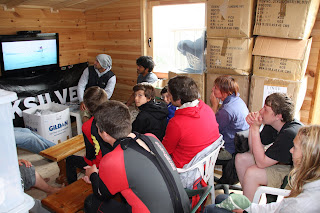 At least we have the warmest rain in the country!! Very windy today - had to cancel our first session of the year - I say cancel, everyone's happy to change to a different time. It's a tricky one because you probably can get away with going in - but the risks are high when walking down the beach with boards flying around, and if someone got hit, well we wouldn't have a leg to stand on. Best to take the cautious approach. We're here for the long term. Sam held a theory session in the new training rooms (photo above), so that worked well.
I popped in on the instructors training session last night. Once a week the instructors are put their paces in the surf by Kelly and then they all come back in for some video analysis. There's a good vibe about it - all keen to learn. It's a funny old thing video analysis because you do put yourself in a position where you can be ridiculed - it's a position of exposure. But last night everyone was really supportive. It's a good team building exercise. It's also quite a perk of working for Surf's Up! that you get a coach of the calibre of Kelly helping you to improve. I might come on board next week for a bit of Kelly magic.
Last year I ran the summer camps with the Boardriders - this year Kelly's going to take it on, which for the kids is huge. Last few details to sort out - we're going to take a crew up to surf the Severn Bore later in August, that should be fun.
Posted by Pete at 08:54 No comments:

Is Newquay a hole?

Is Newquay a hole? I don't think so. There's been lots written about it recently following the death of a young lad. It's pretty obvious that the GCSE leavers have disappeared from Polzy, there's a few about but nothing like it used to be, so we have to assume that they've upped sticks and headed south. Can't blame them, we haven't exactly had an inclusive policy towards the young adults have we. We stopped contributing to the police fund years ago realising that actually there's management and there's just plain bullying. I think the policing on Polzeath was overdone, but I also understand that there was an issue.
Back to Newquay .. it serves a purpose. It's great for partying, great for young people and great for surf. That's about it. Okay the drive in is a poor advert for the UK's surfing capital but investment was pouring in to make things better, before the recession took hold. It will improve, but most of the development will no doubt need an upturn before the building continues. We go there loads in the winter with the kids - I think it's a great place for kids to grow up. If you look beyond the pound shops and Newquay Lifeguard hoodies, there are some magical places to visit. You just need to know where to go.
As for the young lad who fell off the cliff. It's a rite of passage to drink too much, drive to fast and experiment with drugs. We just all hope as parents that ours are the lucky ones to come through unscathed.
Disappointment: On my visit to Newquay today I had a KFC. Not something that I choose to do regularly, but it was raining, I was passing ... one thing led to another. The sweet aroma of the deep fried chicken lured me in. Had a sit-in Colonels Original, three pieces. One leg plus two other bits (of chicken I assumed). But no box!! NO BOX!! The chicken came just rattling around in a bag - that's no good. I want a box to catch the juices in. I don't want to put a bag up to my chin. Most unsatisfactory!! Am I getting old?
It's been raining all day! From 9am on and on and on. And the surf's gone small! I think in time today will be forgettable. Unless we get flooded - and on the basis we're on a hill, that would be memorable. I'm sticking with forgettable (yes spell check, with a double t ....tttttttt happy now?)
Posted by Pete at 17:55 No comments:

Back at the Coal Face

Following another night of unsuccessful fishing in the boat (where are they?) today was a day back at the coal face. One short of 300 surfers through the doors called for some Crasky magic making a return in the instructors vest. I have no problems doing it - if the call is made then I'm there. And to be honest, it's really cool to be back doing what I think I'm best at. What's also really good is to get a feel again, from a first hand perspective of just what it takes to manage the numbers that we deal with... and I can't believe we've done it for so long. It's enough to make my hairs go grew.
So yes, last night? Back in the boat, the wind was howling, the rain hard, but the boys wanted to go for a spin. We were one of only two boats out in the whole of the estuary, which tells you something about what it was like. We found shelter for wakeboarding and then turned off the engine to drift in search of anything fishy. Nothing. Over to Padstow, have a look in calmer waters. Nothing - and then a luck out..... a small boat of local fishermen set off. We followed to their 'top spot' - nothing. It really was pretty bleak when we made our final journey across the estuary, wind against tide. Super choppy, the boys got the giggles!
I saw my dad yesterday for the first time in a while. He lives down here, but our paths only cross now and then. He looked well and happy, the best I've seen him look in a while, bit of spark back - which is great to see.
Posted by Pete at 19:56 No comments:

I have to thank my big sis for contributing to the new boat (rib) - I think my brother-in-law knows by now?! Took the boys out for some wakeboarding, fishing and exploring until the sun went down last night. Happy days. Everyone should get a boat!
I had no idea of the time when we came off the water, it was close to 10pm! My phone was on the blink (put the sim card in back to front!) so I hadn't communicated with Janey where we were or when she could expect us back. I fully expected her to be fraught with worry. But no, she was enjoying some peace and quiet in front of the telly!
Posted by Pete at 09:47 No comments: 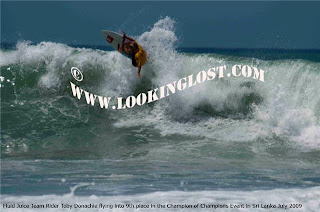 Great shot of Surf's Up! Team Rider Toby nailing it in Sri Lanka. This is good news. Toby's been going through a difficult time recently, a 'right of passage' period when maybe he's trying to work out what he wants in his life. He went out there and proved how good he is - to come ninth is a massive achievement. I've said it before and I'll say it again - he's a rare talent, if he can keep the faith then he has a shot at making it all the way.
More good news - we've teamed up with Quiksilver to do their team rider training camps here in Polzeath. Kelly continues to do good work with our elite team. When I turn up a competitions it's clear the impact that he has on the scene.
The beach was busy yesterday, in full swing, but I was able to head off to Looe with Billy and Fin for the day. A full days fishing for Bass. There were shoals of them swirling about in river mouth but could we catch one?! No - hours passed without a bite. These Bass are a bit smarter than Mackerel. Fin's turning into quite a fisherman though - he's got a real feel for it (despite not catching anything!).
Posted by Pete at 09:30 No comments: 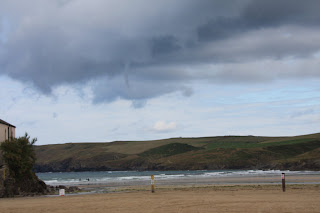 You can just about make out the twister on Pentire (up from the yellow post). Funnily enough the weather lady in the morning said that the clouds would be, and I quote, "Tornadic"! Never heard that before - but she knew her onions.
Took the new boat for a spin with the boys - that's one life enhancer right there. We launched it at Rock, went around to Polzeath, back into Padstow Harbour to take a close look at the boats and then under the bridge at Little Petherick. Quite an adventure. It was raining and pretty horrible, but great fun. We tried to launch again last night but the wind was too strong to take the boys out - might have flipped the boat!! The pontoon was nearly submerged with chop! Will try and get out later today. Got our fishing stuff all prepped!!
We'll have to hope that the weather improves - really could do without a year like last year. Not that it was bad from a business point of view. But this year with so many new people coming down due to the recession, this is showcase time. If Cornwall has the opportunity to shine, then we'll discover a whole new set of converts keen to visit on a regular basis. Bookings are very strong - just need the sun to shine like it did a few weeks ago, with some surf as well obviously! Is that too much to ask?
There were three power cuts in the village last night. Very exciting. Polzeath busy now with holiday makers. Now in peak time mode! The local schools break up at the end of next week - really early for them, it's going to be carnage!!
Posted by Pete at 09:27 No comments: