Here's Kelly's latest report from the weekend (before last) comps.

The Volcom Stone Tour in England is just one stop on the European tour that they hold a compition in every surfing country including Germiny. Every finalist gets to go to france next april to compete in the finals to find out who is the best Junior in Europe. So there's a lot up for grabs. The comp was held in Porthtowan where the surfers enjoyed great conditions - 3 to 4 foot and cleanish - and because of that, it was decided to run the whole event on the one day rather than the two - making for a very long day! But the boys who came down to that comp did really well, they all surfed hard and got there placings in the finals again. Harry Timpson surfed consistently throughout the event landing the only air of the comp in one of his heats. He went on to win his age division. Max Payne surfed well in all his heats getting some nice nearly vertical reos in earned himself the respected place of second behind a just about unbeatable Harry Timpson. Following close behind Max, and the youngest of all the competitors to make the final came Liam Murray Strout. Ryce Barfeild who was unlucky in his heat and drew a hard heat in the first round went down fighting - like I always say to the guys, "what do you prefer - to surf well and get beaten or surf poorly and win?????

END RESULTS 15 AND UNDER

Unfortunately both events where held on the same weekend and I can't be in two places at once. I can't give you an eye witness account but from the sounds of things every one surfed really well. From our Newquay squad Angus Scotney won the under 12s - well done. Dale foster also surfed well thoughout the event but did not surf his best in the under 16s final but still got himself second place.

On a different note Gabbie Row our only elite girl left who is taking her training and her surfing seriously and who in my eyes is and has been one of the top girl surfers in the country not only in her age division but in the open devision as well, but never seems to put it all together for the entire event, finally did it in this event. She won not only her own age division but beat all the top woman in the country and won the Open womans as well at the ripe old age of 16 so a huge well done to her.

Nice work team - well done Kelly. The Surf's Up! Elite crew have been dominating proceedings this year which is great to see. We invest heavily in their training programme and competition support, for no other reason than we enjoy seeing the team try and reach their potential. We've been at the forefront of kids surf coaching for the passed three years and are well ahead in terms of the intensity and consistency.

Lost one stone!! Sweet - nearly down to fighting weight. No chocolate, no caffeine - seems to have done the trick! Oh, that and the 300 miles that I put in on the bike this week!! Before, I was built for comfort, now I'm built for speed!
Had our yearly appointment with the accountant. Normally involves me getting all bitter and twisted about having to pay VAT on surf lessons - which is effectively a straight tax on turnover. I don't mind when it's the shop and you're selling product, something to offset. Makes me MAD, so no change there today. A good 40 miler cleared the head!
Posted by Pete at 16:34 No comments: 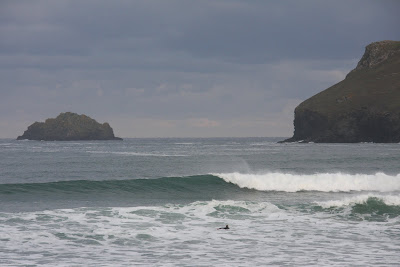 Surf this weekend - very nice.
We headed up to Haldon Forest Park, Exeter yesterday - took the bikes - what a great place that is! Lots of bike tracks, walks through the trees, stunning views - and it was busy. Really good to see so many people getting out there, being active and these places getting investment to make the most of what's around. Will definitely go up there again soon.
Posted by Pete at 11:08 No comments: