That's the last time I take Janey up a Latte!! Not enough appreciation! And she's made me work today! Shucks!
Posted by Pete at 11:48 No comments:

I think I'm in trouble

Firstly, hold the press. The surf school was busier on Thursday and Friday than last year - didn't quite make up for Tuesday and Wednesday, but at least it moved in the right direction. And the shop has had an awesome week. Mikey's come back into the shop full-time and has been rocking and rolling it, has got the team of Ellie, Polly, Jenny and Alice all fired up and they're working so well.
So this business of being in trouble - I'm not quite sure the depth of trouble I'm in. I shall find out probably in the next hour or so. Yesterday, at 2pm I said to Janey that I'd take the boys off to do something - the something turned into a smorgesbord of activity and fun. Go-Karting in the rain, followed by a meal out in Newquay and then off to the circus. No problems with that except for the fact that I'd taken the office and shop keys with me! Which I didn't realise until I phoned from outside the circus at 10.30pm ( I'd wrongly worked out it would finish by 9.15pm) to inform her that we'd be back soon. The conversation went a bit like this....
"Have you got all the keys?" (shop and office)
"Erm, yes I have. They're in my pocket!"
Click! This wasn't Janey putting the phone down, this was sound of my phone battery running out. But she didn't know that. So it was a triple whammy - we were very late, I'd got all the keys (including the spares) and then she thought I'd put the phone down on her! Ooops. When we got home I dropped the boys outside the house and went down to the beach to lock everything up. By the time I got back the house was dark and everyone was tucked in. As of this moment, I've only seen Janey in her sleeping beauty state. Don't fear though - I'll bring her around with a nice cup of take-away Latte!!
The circus was brilliant. Absolutely fantastic - highly recommended. And the go-karting great too. "Look and learn boys" I joked as I eased into kart number eight and lowered my visor in preparation of the race. How they laughed when I was the first one to stack it - into the tyre wall on the first corner, right in front of the viewing area. I could see them bent over double!! I had my revenge - by the time they got on it was pouring with rain and the track was like a ice rink.
Happy days.
Posted by Pete at 08:15 No comments: 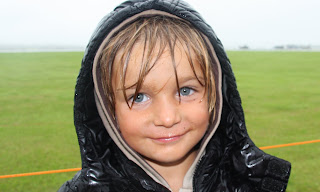 Looking forward to the impending heat wave? The Met Office have just declared that August will be unsettled, so we can assume that means we can now fire up the BBQ's!! 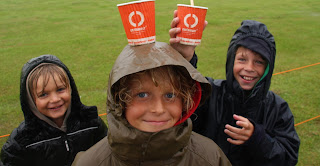 Yesterday was a wet day! Took the boys to the RNAS Culdrose air day - rubbish! You'd think they'd be a plan B. But no we stood there for the best part of six hours in the pouring rain waiting to see some action. The best action was a police dog show that reminded me of a school drama lesson. "Okay, I want you to go off in groups of four and prepare a two minute routine that you'll then perform in front of the class." This invariably involved a lot of running around chasing baddies and firing pretend guns. But hand on - over the tannoy we've just been informed that a plane is 14 miles away, is travelling at 342 knots and that there's every chance that it'll be able to crack on with it's display. 9 miles and counting down - anyone guessed what it is? You feel the excitement build. And then there it was ... a Tornado. Just like a plane from Top Gun. It swooped in low and touched the runway .............. and then parked up. Oh .. that's disappointing then. And so it was that planes and helicopters sort of arrived and went - some you caught fleeting glimpses through the low cloud, others you just had to work out what they were by the sense of hearing. By 4pm the boys had had enough - they left with their grandma. Ten minutes later and the show began!! But it was all too late.
My blog has been bare for a few days. No reason - just been out and about doing stuff. Took the boys fishing on a boat trip out of Newquay. Sea sickness kicked in pretty early as did the rain. It was miserable. I thought it was a two hour trip and consoled myself with this thought until I was informed that it was actually a four hour trip - deep joy. I suffered from Biggus Vomitus Over-Sidious for the best part of the entire trip. The boys loved it!
On the beach the last two weeks in July have been a challenge. Which has come as somewhat of a surprise, particularly as up to then the season was looking so positive. Well down on numbers compared to even last year. But hey ho, it's tough for everyone out there, no reason why we should be any different. The surf shop has been the saving grace proving to be 50% up on original targets and that's going to make a big difference come the end of the year. I'm pretty sure the investments we've made in the beach house - ie shop and office, have come at the right time. And I'm also sure that Surf's Up! will change and evolve next year into a slightly different beast. Of course we could go out and chase more business, but that's never been the Surf's Up! way. I left a life of hard sell behind many years ago and that's not going to start again now we're a bit quieter than last year. Just got to tweak the business a bit. To be honest the margins at the surf school at so tight that the fact we're quieter is the catalyst for change that we need.
Posted by Pete at 08:27 No comments: