Even I had to dig in today! Two sessions from Craskie .... in a row!! Need a lie down! Can't remember the last time that happened. I think I've only done about ten sessions this year, might not even be that many. Which is kind of a shame as it's still a buzz. As with anything, a change is as good as a rest and I've felt in the past couple of years that I'd probably done my time at the water's edge. Good to keep the old hand in, but at the same good to keep fresh blood coming through.
Following our chat with our 'Dragon' earlier in the week, myself and Janey have been doing a lot of chatting. It's funny to be thinking about next year, but we're really excited about it.
I had a dilemna last night. After the boys footie I decided a chinese take away was in order. I placed the order, popped over to the Spar and by the time I got back the order was ready. I clocked the prawn crackers for the car journey and headed off. As I departed I noticed the lady from the chinese walking on the pavement looking up and down the road. She looked worried. It dawned on me that possible she'd given me the wrong order. I felt the bag as I drove and satisfied myself on two counts. One that I could feel a pot of soup and secondly that if I did turn around, park up etc by the time I'd done that there'd be little point. So I headed home - it was a gamble.
Sure enough when I got home it was the wrong order. Instead of Chicken and Sweetcorn soup, King Prawn fried rice and chicken noodles... what I got was chips, some sort of meat in batter ... argh, and sweet and sour sauce. Horrible. I can only guess that who'd made the order was of a large size. Gutted. Oh well, I'll check next time. I phoned the take away so that she could put the issue to bed. They do good food, so no complaints, one of those things.
Posted by Pete at 16:38 No comments: 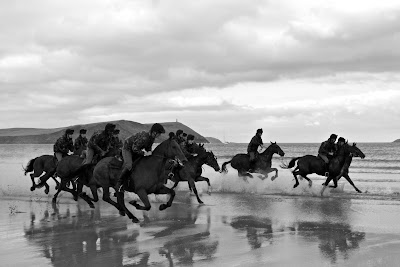 Quite special watching the Queens horses gallop across the sand and through the surf this morning. Some took to swimming. Early Monday morning when they also went in, there was a surfer who had to pull off a 2ft wave as one of the horses fully dropped in! More photos on Surf School gallery 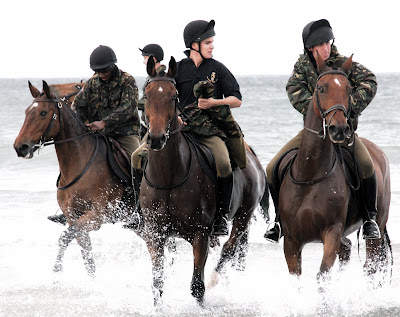 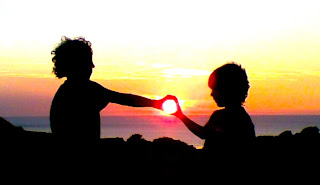 The routine of the last few evenings has ended with a walk to the top of the field as the sun goes down to scramble on the hay bales. Bit of fun with this sunset photo.
The last few weeks have been a bit weird! For no reason in particular. However today we had a meeting with one of the numero uno business men in the country which helped to settled us down!! It was a meeting of home truths and dashed dreams!! Only kidding, what he brought to the table was a sense of realism. We asked for a business critique. There are aspects of our business that we understand very well, and others that as we've grown have not come naturally. What we've come away with is a very clear understanding of areas that we have to focus on in order for them to become strengths - three to be specific. It's not often you get the opportunity to sit down with someone who really knows the score. Naturally, we will follow his advice to the letter - why would you do anything but?
So in summary of today's meeting - a very nice gentle 'get a grip' kind of meeting. The business does well, but if we're to move into areas that we'd like to in the future, then we need to improve our systems. What's brilliant for me and Janey is that we can't argue with the advice. It's come from the top man, for free - you just got to run with it. And for me and Janey that's brilliant because it helps us to sing from the same hymn sheet. It's been a very good day. On occasion we battle with the long term plan, but no more!! 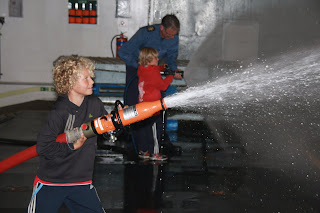 Took the boys down to Plymouth for Navy Days - fantastic. We managed to get round five ships, great day. So much to see. Much more appreciation of what our forces do for us.
In one of the ships there was a young lad sat down. He was signing books. He'd lost both legs and one arm in an explosion. We bought his book and he signed it for Billy and Fin. "Take care" he said. Not much you can say to that.
Posted by Pete at 16:46 No comments: