Hey Dudes, thanks so much for your responses to my e-news last week. There was some pretty heavy stuff coming right back at me following my personal out crying! I'm lovin' hearing your surfing tales, so keep 'em coming!

You see what I'm doing here... second e-news in a week, well nearly a week! Keeps Janey off my back and I can go cycling and meet mates. As I approached her yesterday she bantered, "What's that face for? You look like you've done a poo in your pants and haven't yet decided whether that's a good thing or a bad thing!" As I say to Cone Zone owner 'The Burnley Stewpot' when supping my first double espresso of a morn, "There's plenty of other places I can go and get this level of abuse!" I'm not sure where Janey got the line from, but I'm going to claim it from this point onwards! Good work Hair Bear!

Hm, last night.... yes, last night, well last night I found myself up on Dartmoor in the dark. And you know how they always advise that you take warm clothing, a torch, a phone, a compass etc... when out on the moor. They say that don't they, I've seen them bearded people on the telly "you must be prepared for the worst. The conditions can change very quickly." "Mate, you sort out those Kendal Mint Cake crumbs in your chinny hair before coming on telly spouting your top tips." Well let's just say I was light on essentials. Guilty as charged me lord. Janey dropped me at Burrator Reservoir following footie at Tavi ... "Shouldn't take me long to tickle over to Ivybridge." I stated confidently. I held my iphone aloft to both impress my boys and to seek the South-West compass bearing that I'd be striding out. The iphone read - '10% battery!' Of all my errors, that was the biggest. However, with running water, wild berries and baby badgers in abundance, any thirst would be quenched and hunger, abated, if the need should arise. If the phone died, the bent of marsh grass and leaning of stacked sheep poo would surely indicate my path back to civilisation. Or more likely, I'd just head straight for the lights coming from the buildings over yonder, that a'way!

My path was set... A to B, over the hill and far away. Hm, turns out A to B, was not A to B at all. Simply not possible. I traversed the moor via every letter of the alphabet... and threw in a few combos too, especially sh's, and even more especially when it came to the icy rivers.... I stood there wondering whether I had the balls to strip off and wade in or indeed wondering whether post wade I'd have any balls left to strip. It was a tough call but in the end the head said forge upstream. Go as far as was necessary to locate a good crossing place, like big green stepping stones that I could leap onto. Then slip off, windmilling arms and legs, before coming to rest in the chilly clear flow, at about waist deep. It was a good plan that met with considerable success on more than one occasion.

It was quite an adventure. We (me and Libby, my six yr old black lab) crossed many rivers, streams, traversed valleys and hills, and forged our way through deep bracken and prickly bushes. At one point we marched through a full military exercise, Marines .... thirty helmets sat atop dirty faces peering above the grassy knolls, their rifle spots focused on the gap between my eyes. I'd seen the helicopter drop them a few moments earlier, their black bodies scattered. "Not the face!" I pleaded. I stopped to chat to one young marine (I'm sure he goes to school with my youngest, Findog) - he wasn't a very good one, I could see him easy peasy lying there with his machine gun. I could have taken him, save for the fact we're on the same side. I recalled my previous combat experience and advised that if I were him I'd get to the fort as quickly as possible. "Have you ever been hit on the top of the head by a paintball, marine?" I asked. He remained still and silent. That's good marine, good. "You know when someone hits you really hard on the head with a miniature modeller's hammer? It feels exactly like that!" He didn't answer. "Are you attacking or defending?" I'd been out here for ages and craved human interaction. "Haven't been told yet. It's a night time exercise." It wasn't. I was only twenty minutes further up the Moorland footpath when I heard the gun fire... it was game on, big time as more choppers joined the action and thumped their urgent tune across the open moorland. We took shelter in amongst some farm buildings that I suspected were the inspiration for the Texas Chainsaw Massacre.... any mechanical grumblings or pull cord pullings, and we were out of there. I say, we. I'd chained Libby to the railings. I'm not stupid. I reckoned on her distraction earning me a good five minute head start. If need be, I'd make my way towards the caravan with the friendly couple peering out of the window.... 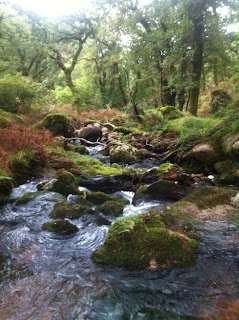 On our adventure we saw sheep, cows, ponies, deer, stags, brown bears, mongeese (three mongoose) and a baby Sloath, didn't spot any big ones, tucked high up in behind those banana leaves, I surmised. We circumnavigated the massive china clay quarry near Cornwood...  did you know that from the quarry you can see the moon? It's huge. But, I have to admit that after all the forging ahead on our monster ramble, I fell short. It was the challenge of Dendles Wood and the expiring light that caused the retreat to lower ground and a sortie back off the Moor. As the light fell beyond the horizon, and the phone expired one last heady breathe, I made the call of shame to Janey. "Hello gorgeous!" "Where are you?" she sighed. My exact position was inside the Cornwood Inn, but that seemed like too much information. "Cornwood, near the memorial. Libby can't make it any further, she's done!" Praise be to the dog. I'll raise a glass to that... doh!

Libby was still comatose this morning. She's been lying on her back all day with her paws in the air, muttering something about "sausages". She hasn't even let me take her down the road for her first motion yet, and she's normally as clockwork as Big Ben. You know you're beaten when you're too tired to poo! That's not my motto, but I can see it would work for some.

Now, where were we, oh yes surf school, surf lessons that's right!! We do them. We've been doing them for ages, since 1995 and I reckon we're pretty good at them. We run lessons everyday at 10am and 2pm. £26 for a two hour session including all the gear ie boards and wetsuits. Booking recommended 07760 126225.

Oh and the Beach House, is still available for the October half term. Sleeps ten right on the beach. Walk the sand right on in, why not, everyone else does!

Okay, my work here is done. Even I can't be sure why I've written to you about my walk across the moor. It is what it is!