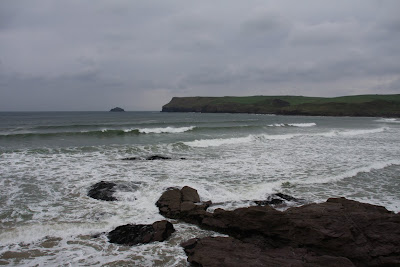 Pretty sweet out there this morning. Chest high on the sets, wind from the SSE - only a couple in the water. Overcast - but warm. Summer suits - kiss goodbye to the boots and gloves!
Posted by Pete at 10:07 No comments:

Bookings coming in thick and fast for Whitsun - looking like it could be a record breaker! I need to pay tribute to my team who are doing a fantastic job on the beach, in the office and in the shop. I'll get some photos and do a proper run through of the crew over the next couple of days.
Posted by Pete at 15:38 No comments: 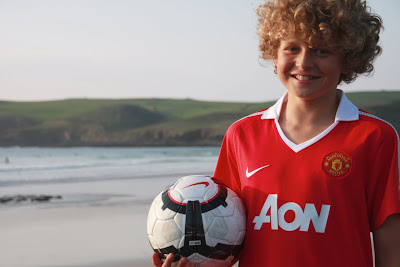 It's been unbelievably stressful - week after week, waiting to find out. And then yesterday, we were summoned! "Billy, can you ask your Mum and Dad to come and see me after I've seen these other parents please." I have to admit I felt a bit sick. As we approached the coach, the previous parents shook their head. Their lad hadn't made it in. He began, "Firstly, thanks for your support of Billy. We really appreciate all your efforts of driving around and coming all the way over here..." I didn't like the way this was going! "We think Billy's doing really well and we'd like to sign him up!" Had it been appropriate to strip off naked and run around the pitch we would have done - but this wasn't the time or the place! But that's pretty much how it felt. You never know what the coaches are thinking or what they're looking for - you just don't know what they're going to say. I think Billy's played some great football, he's come on under the guidance of Ian and works hard during training - but as I said, you just never know.
Awesome news. It's as if our lives have been on hold. We know how much Billy has wanted this and he's worked so hard. We had a good long chat with his coach, who is an ex pro footballer so you tend to listen very carefully to what he has to say, having made the journey himself. There's stuff Billy needs to focus on "It's not the best players here today that will make it. It's the ones that work the hardest and put in the practice." Couldn't be any more complicated than that.
So he's in. First step on a long road. Breaking into an established team, and to be one of only 14 boys in the his age group in Devon and Cornwall is a great achievement. If you want to make it, as Billy does, then this is where he needs to be. It's the quality and intensity of training that's so important, and having the opportunity to play against other league teams. If you want to get noticed, there's no other way. We're very, very proud of him and I think when he left for school this morning he'd grown a couple of inches.
So that's one in! Now there's Fin - who's also on trial in the younger age group. Oh, the stress of it all!
Posted by Pete at 09:38 No comments:

Well that was the longest Easter/May bank holiday period known to man. And it coincided as we all know with a spell of fantastic weather, surf and offshore winds. It could not have been any better. A great start to the year - in fact April was 22% busier at the surf school on previous years. Sweet as.
Bit of change today - cold wind, small surf, no-one on the beach!
Posted by Pete at 09:48 No comments: